St Vladimir Statue to go up on Moscow hill

DIscussion and News concerning Orthodox Churches in communion with those who have fallen into the heresies of Ecumenism, Renovationism, Sergianism, and Modernism, or those Traditional Orthodox Churches who are now involved with Name-Worshiping, or vagante jurisdictions. All Forum Rules apply. No polemics. No heated discussions. No name-calling.
Post Reply
7 posts • Page 1 of 1

St Vladimir Statue to go up on Moscow hill

After the usual disparagement of religious signs and symbols, especially those involving Christian statues or Icons or such,
the New York Times finally got to one useful point at the end of its article on the projected large statue of St Vladimir planned to be placed on one of Russia's few hills.

The statue will be 82 feet high and in my opinion has no more sinister implication than a wish to commemorate the great St Vladimir in Moscow. There is a wonderful statue of the baptizer of "Rus" in Kiev, which I have seen. It's really inspiring.
No wonder that the Muscovites want their own version.
But no, it's got to be twisted into a grab for attention by Vladimir Putin or geopolitical aims by the cynical NYT. No mention made of the fact that Vladimir is one of the most common names in all of Russia. It's not like Putin is the only bearer of it !
The second paragraph below succinctly explains the historical side of why such a statue is relevant for Moscow.

"Turning to history, the culture minister said that in converting to Christianity, Vladimir had determined the entire pattern of development of the Russian state, whereas Kiev had lost its independence.

“The Moscow princes are the direct descendants of Prince Vladimir, even at that time when Kiev was part of the territory of Poland,” he said. “Vladimir has a greater connection to Moscow than to Kiev.”

The article seems to be working overtime to fan the flames of a significant controversy where probably only a fairly mild one currently exists. The protestors are highlighted out of proportion, it appears.

There are no interviews with the faithful opining that the statue could help in protecting Moscow from God's wrath or any such silly ideas....or less controversially, asserting that people will gaze upon it, remember who they are, from where their heritage derived, and possibly feel moved to pray piously.

Appropriate material for the week leading into All Saints of Russia, anyway.
Top

A deprecating BBC report written around that time last year is astonishing for its lack of journalistic objectivity.

The BBC piece begins with the irritating painting of a middle aged Communist woman as sleek and attractive. Moreover later on as 'shrewd', plus gives this proponent of a dead and evil creed the highest credibility. Why ? Because the article centers on her and her negative reaction to the idea of St Vladimir being placed on the Sparrow Hills overlooking Moscow.

Now that site has been changed [ see next post ].
I wonder what 'Ms Communist' will find now to complain about this new locale ? The question is, though, why BBC is so interested in hearing HER point of view. Again, as I said above last summer, where are the articles quoting approving Russian Orthodox faithful or even other denominations who respect the heritage of St Vladimir ?? That would be normal for a UK news operation to interview Protestants or Baptists in Moscow. Very strange coverage indeed.

" I meet the best-dressed Communist I've ever seen. She's in a pale grey pinstriped suit, with the natural poise of a ballet dancer, her long brown hair, greying at the temples, tied back in a neat bun. Her name is Yelena Shuvalova, and she's a member of Moscow city parliament....

"So what exactly is it that Shuvalova has against Russia's patron saint? She looks at me with shrewd blue eyes and a half-smile.

"So, no objections on the grounds of religion or politics then?" I ask, thinking back to the 1930s, when Stalin had the city's most imposing Orthodox cathedral blown up. That cathedral has risen again, rebuilt on the same site, its burnished domes a symbol of a Russian Orthodox Church once again enjoying a close relationship with the Russian state. Some would say too close.

"Oh no, no religious objections," says Shuvalova. Purely architectural. It's the right statue in the wrong place.
[ author asks his own friend Svetlana : ]
"The students and Shuvalova say they have no political or religious objections to the statue - are you sure that's right?" I ask her. Svetlana looks at me as though I were a particularly dim child. "There are some things you just can't say," she tells me with a smile.

And these days, it's true, Russians hesitate to criticise the Church too loudly - not least with new anti-blasphemy laws allowing harsh punishment for those "offending religious feeling"...

I think of another conversation I'd had about the statue with my friend Alexei the day before. He was firmly against it.

"I'm an atheist," he told me. "I believe in science. Not superstition or saints. In the old days under the Communists, we weren't allowed to believe in God. Religion was forbidden. These days, it's compulsory."

It is not at all subtle how the Western news agency mocks the way the system has changed in the RF. This seems to be other goal of the article besides glorifying the aging Communist parliament member : to ridicule the "persecution" of those poor, poor atheists by a new Russian government distinguished by firm pro-Orthodox Church policies.
Last edited by Barbara on Sat 13 August 2016 3:49 am, edited 1 time in total.
Top

The St Vladimir statue is scheduled to be completed on the day of the Kazan Mother of God [ called Day of National Unity in this Russian news article ] in its new choice of location :

"Work on the installation of the monument to the Baptizer of Rus’, the holy prince Vladimir has begun on Moscow’s Borovitskaya Square in full agreement with UNESCO, stated Russian Minister of Culture Vladimir Medinsky.

"Responding to journalists’ questions on the initiation of the work in the buffer zone of the UNESCO world heritage site of the “Moscow Kremlin and Red Square,” the head of the Ministry of Culture again noted that “UNESCO, in principle, can neither give permission nor forbid anything,” reports news agency TASS.

“I twice met personally with the Deputy Chairman of the cultural organization. All of the propositions of UNESCO in regards to the reconstruction of the square of Borovitsky Hill, the height of the monument, conducting additional archaeological research, right down to the organization of parking by the monument were thoroughly considered in the designing of this complex by the Kremlin,” reported Vladimir Medinsky.

"Note that the monument to the Baptizer of Rus’ will be installed on Moscow’s Borovistkaya Square. According to the latest information it is planned to be installed in 2016 on the day of National Unity, November 4.

I still think the statue would have been much better atop an appropriate hill overlooking Moscow. From there it would have been by millions every day, including all who arrive and depart by air to the capital city.

Surely some solid ground could have been found elsewhere.

Here is an artist's conception of what it would have looked like in the original Sparrow Hills location :

And here is what actually resulted, partly due to all the furor whipped up by negative coverage in Europe and the US [ I suspect ] : 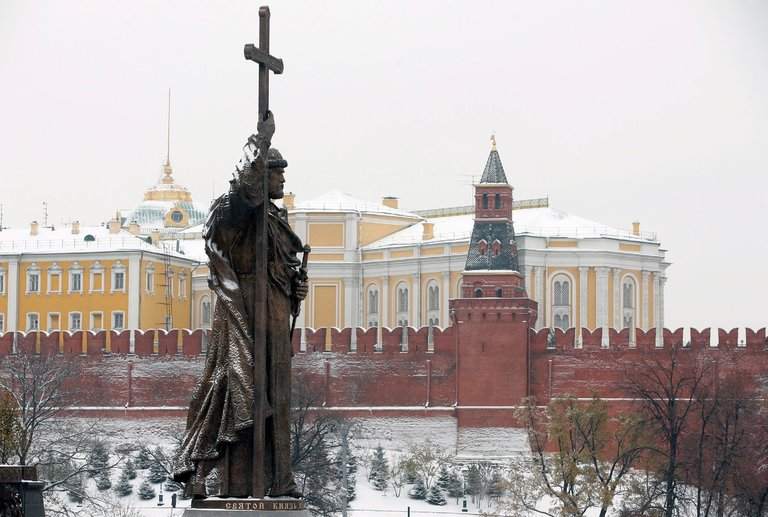 The coverage of this event in the West has assumed ridiculous proportions. Many articles have appeared, screaming the same
themes. "Provocative" statue ! ; "Controversial" statue !. The reporting seemed copied from one or two sources with no fresh approaches.

The main point nearly all reporting outlets hammered in to their readers was that this was an exercise in narcissism for Putin to have produced a gigantic stature - by Western standards, though not by Ukraine's, which has had a monument nearly as tall to St Vladimir by the Dnieper River since 1853 [ the year of St Feofil of the Kiev Caves' repose by the way ].

"Critics disparaged the work, which rises nearly 60 feet at a main crossroads here about 100 yards from the Kremlin walls, calling it an eyesore and a thinly disguised monument to the other Vladimir."

Putin seems more of a functional, get-the-work-done person, not a devotionally-oriented soul who reads akathists to St Vladimir at home in his spare hours. I doubt the RF leader took personal satisfaction in the fact that the new statue is of his patron Saint. He probably wanted to accomplish a few things. One is that the much-hated Bolshevik leader, L., bore that same first name. Therefore, at one fell swoop, Putin could please Orthodox Christians the world over -- and placate holdover Communists in Russia. The latter evil creature had to have been baptized in honor of St Vladimir, however far the Soviet ruler diverged from Christianity.
Coincidentally or not, the inauguration and blessing of the monument was scheduled for the annual "National Unity Day", 3 days before the 99th anniversary of the Russian Revolution, November 7.

Then, too, notice that the earlier model for the statue had a hand extended, blessing the urban area. The revised model grasps a long sword. I get the message from this choice that Putin and others want to convey to the West "Don't push us too far : we are ready to fight - IF - IF - we absolutely have to."

Another aspect of the Western media coverage might reflect the anti-clerical, anti-Orthodox, anti-Saint bias of nearly all reporters today in Europe and America. One can hear ridicule, as if to say "WHO needs a 60 foot statue of some old warlord".
Of course, had it been a current American pop star, no one in the media would raise an eyebrow most likely !
One can hear seeping through the lines of every one of the pieces I read the age-old Protestant prejudice against Orthodoxy [ and the more familiar Catholicism ] for their veneration of Saints.

The only Russians quoted were those hostile to the project. No indication is given in the articles from what religion is each source : possibly atheists and Baptists were hand-picked by the reporters to sound off, while pious Orthodox citizens were never interviewed or else their statements were cut out somewhere along the way prior to publication.
Top

Also not mentioned by most of these news outlets was the fact that the widow of Alexander Solzhenitysn, Natalia Solzhenitsyna, was present for the unveiling of the statue. Had this fact been highlighted, certainly many Westerners would have been interested due to the respect many hold for the writer of so many exposes of the evils of Communism and the Soviet system.

Instead, the Western reader is encouraged to mock the building of a Saint's statue in a foreign capital as 'heathenism' with all blame going to the leader of the country, when in fact this likely was mainly pushed by the Russian Church with support from the government and other quarters.
Top
Post Reply
7 posts • Page 1 of 1