St Feofil of the Kiev Caves

An online Synaxaristes including martyrologies and hagiographies of the lives of the Orthodox Church's saints. All Forum Rules apply. No polemics. No heated discussions. No name-calling.
Post Reply
25 posts

Barbara wrote:Agree. Well, dare I look, or do you want to tell me what else even worse was done by said artist ?

If you have any more information of St. Feofil of the Kiev Caves, please continue to post! Thanks.

Christ is born! Glorify Him! Tomorrow is the Eve of the Theophany.
Lord Jesus Christ, have mercy on me a sinner.
Top

Yes, I do have lots more to post on St Feofil !

Referring back to an earlier post here : http://www.euphrosynoscafe.com/forum/vi ... 907#p69285,
interestingly, there is a fresco of Tsar Nicholas I [ provenance not yet identifiable ] which accompanied a very sympathetic account of this Tsar on a now dormant blog, the Mad Monarchist [ a superb resource about which I had forgotten ! ]. If interested, look under the label "Russia" to see this not lengthy but thorough profile of Nicholas I currently at the top of that category.

The existence of the fresco, probably in some Church in Russia, confirms that it must have been a special design of Heaven that St Feofil was directed [ by St Paraskevi, his patroness - ? ] to repeatedly, over the course of years, locate himself at the exact places and at the very moments when, visiting Kiev, Tsar Nicholas I would encounter the incredible visionary.

One has to objectively notice that meetings of Tsars with TRUE Elders prearranged from Above occurred only rarely in the history of the Russian monarchy. 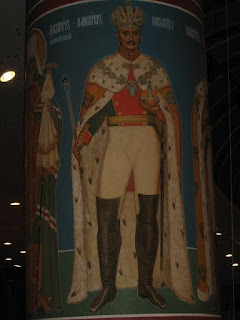 Back to our great Saint, here is an edifying story of how disobedience to the Starets lead to an unpleasant awakening from a narcissistic slumber in one of his supplicants. Note how the young woman doesn't even consider that St Feofil could warn her of difficulty ahead. But in her self-aggrandizing dreams, the pilgrim only imagines he would give her something to feed her illusions of how good and deserving she was.
When she discovers she did not receive the expected pat on the back, she gives herself away as a phony disciple of the Starets, for she lashes out violently at what suddenly became "That old man" for not fulfilling her narcissistic demand for praise and attention.

"In the city of Tula there lived two wanderers, Katrina S. and her brother Ivan. They were without family or relations. Each spring they would set out for the holy places, he to the north --

-- and she to the south. With the coming of the cold, they would return home for the winter. 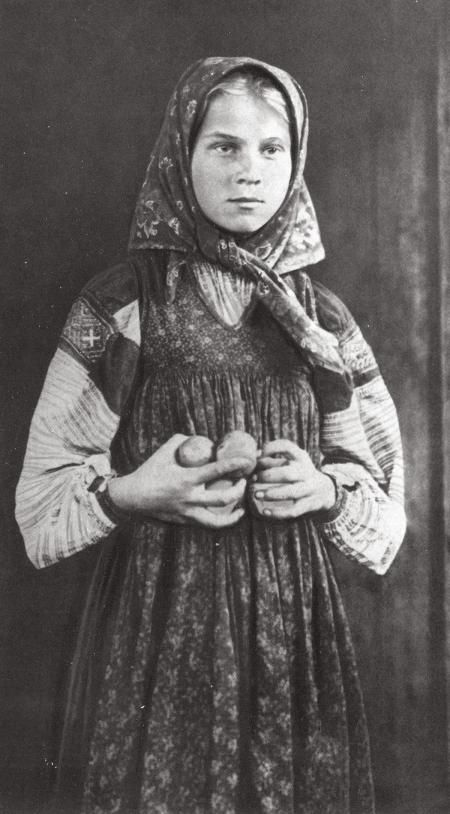 and, as usual, stopped to see Starets Feofil. The Blessed One gave her his blessing and handed her a little clay pot tied up with paper as a souvenir.

"Here, take it. But make sure that you don't untie it before you get home."

Katrina left but on the way her curiosity began to work on her. "What could be in the pot? Probably the Starets foresaw something nice for me and put butter into the pot." Finally, she could no longer contain herself and she decided to open it in spite of the Starets' admonition not to. She untied the paper and peered into the little pot. Much to her shock, there lay a dead sparrow.

"Oh, what kind of a joker are you? Why just see what that old man has thought up. A dead sparrow," she thought.

In anger she spat and then smashed the pot against a tree.

About a month later Katrina returned home from the pilgrimage.

"What, my dear brother hasn't been home yet?"

"No, not yet," the neighbors replied, "but there is a packet here with your name on it."

It turned out to be nothing less than news that her brother had been robbed and killed on the road. Katrina then understood the significance of the dead sparrow and she broke down into bitter tears.

But notice that the bitter tears are due only to the bad news of the sad death of Katrina's brother, rather than tears of self-recrimination for not trusting St Feofil and speaking so angrily against him. Surely there is a much bigger penalty given to souls who speak and act so rebelliously toward their True Elders. Katrina should have confessed her disobedience and fury to the Starets either by letter or on her next trip to Kiev. She should have resolved to obey him implicitly from then on -- obedience to a true Elder being one of the best remedies for narcissistic personality disorder. Though not called that in the early 1800s, the condition is as old as time.
Top

Metropolitan Philaret of New York addressed the flock of the Russian Orthodox Church Outside of Russia [Rocor] with an epistle to announce the upcoming glorification of St Xenia of St Petersburg in September 1978. Himself a great Saint, Rocor's wise leader gave some background for the phenomenon shared by Blessed Xenia and a few similar holy men.

"From the history of the Russian Church we know of at least a few fools for Christ's sake, and they shock us by their struggle.
In Moscow, for example, there was the renowned Basil, and likewise Maximus, the blessed ones ; in Novgorod the blessed ones Nicholas Kachanov and Theodore ; in Kiev Blessed Theophilus, who is yet uncanonized...."

Perhaps this was a hint for future Synod meetings to approve the canonization of St Feofil. Eventually, 2 decades later, Rocor did glorify the Kievan fool for Christ's sake.
Top
Post Reply
25 posts