"I was there too": Fr. Moses of Optina

An online Synaxaristes including martyrologies and hagiographies of the lives of the Orthodox Church's saints. All Forum Rules apply. No polemics. No heated discussions. No name-calling.
Post Reply
6 posts • Page 1 of 1

"I was there too": Fr. Moses of Optina

One of the most remarkable examples of humility amongst the Saints takes the breath away. The story is about the famous Abbot of Optina Skete. As St Moses [Putilov ] reposed today, June 29, 1862, I wanted to bring it up.

I have not come across such a striking anecdote. Almost every tale passed down to the current generations concerning all true Elders, Optina and otherwise, instructs stereotypically how the Orthodox ascetic must speak and behave to attain humility. Though well meant, these stories have no sparkle ; some are counterproductive. The reader becomes discouraged at how superhuman are the True Elders in their humility.

The example below, however, can be copied by ALL readers, as it is simple but deep.

From his birth in 1782, the future Fr Moses was not necessarily a model of humility, as he was known as a fiery person. Drafted by the future Metropolitan Philaret [Amphiteatrov] of Kiev to found a special Skete separate from Optina Monastery for more serious ascetics, Elder Moses took on this formidable challenge. With his brother, the future Elder Anthony of Optina, he physically cut down numerous gigantic trees to clear the land. Once empty space became available, endless labor was required on the part of the Abbot to get buildings constructed in this remote area, 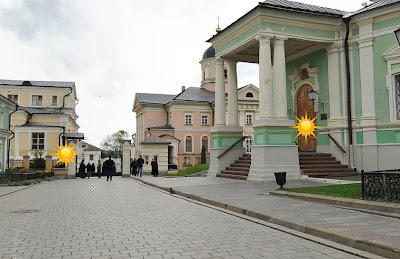 provide for food for a quickly expanding brotherhood, and manage all aspects of life in Optina Skete for decades.

..."always and everywhere, he would remain in the background and conceal his own personal labors. "He was a man of actions, not of boastful words," as one person described Father Moses.

Under Father Moses, "Optina Hermitage became renowned among all Orthodox Christians, but who ever heard Father Moses boast of this great renown ?" ... Father Moses responded to all praise with a scarcely perceptible smile which said 'I don't agree with you'...[ In fact, w]henever did he mention his achievements to anyone ?

Old timers among the Optina brethren relate that once a certain Bishop visited Optina Hermitage on his way to the capital [then St Petersburg]. After touring the monastery, he stopped by the skete, marveled at its secluded location and arrangement, and then asked the Father Superior, who was accompanying him, "Who built all this ?"

Father Moses answered in a few evasive words to the effect that it had all been built gradually over a period of time.

The bishop responded, "I can see for myself that the skete is situated here --- what I want to know is, who is it that built the skete ?"

"It was the superior and the brethren," answered Father Moses.

"They say YOU built it all," continued the bishop.

"Yes, I was there, too," answered Father Moses.

After this, the [circumspect] bishop did not feel like questioning him further."[/color]
Top

"After prayer, his favorite occupation was reading spiritual and sometimes historical books. He loved very much to read and tried to do so at every available moment. The instant the smallest break came up, Father Archimandrite Moses would pick up his reading....

Putting into practice what he read, Father Moses successfully weathered the storm...with the aid of spiritual knowledge, labor and humble prayers. He was forty years of age when he moved to the Skete of Optina Hermitage, whence he traveled twice to Moscow to collect donations. At forty-three he was appointed superior of the monastery. Thus, in the flower of his manhood, with a lively and ardent personality, and being physically handsome and strong, he suddenly found himself, instead of the solitude of the Roslavl forests, constantly in the midst of a crowd and associating with all kind of people.

Optina, also on the edge of a large forest, is on the right bank of the River Zhizdra, around 80 miles southwest of Moscow.
Much of the later-to-be famous Skete was built from the ground up by St Moses [Putilov], who must have used that strength mentioned above to cut down the trees with the help of his brother -- (a decade younger) -- St Anthony of Optina, and some hired workers. After that, Archimandrite Moses was solely in charge of building schemes and expansion of facilities, including several guest houses for pilgrims ; all in all, a formidable task.

This cannot but have caused him severe inner conflict at times, yet his life remained radiant and blameless."
Top

Going back still further in time, let's take a look at the arrival of Fr Moses and his cohorts from seclusion in the Roslavl forests farther west.
Father Moses and his brother Father Anthony, along with 2 monks, Fr Hilary and Fr Savvaty, arrived in Optina nearly 200 years ago, in 1821. We should hold a celebration here in 3 years to commemorate that occasion !

Settling for the moment in the area of the apiary where Elder Leonid would famously later receive crowds of supplicants from far and wide, the 2 brothers made a 'bee-line' for Kaluga. There they sought the blessing of Bishop Philaret [Amphiteatrov], whose idea it had been to start the Skete. The future Metropolitan of Kiev permitted Fr Moses, as the elder of the 2, to locate the correct place for the Skete.

Optina's apiary being 400 yards from the Monastery, the monastic band based themselves there. From the same source cited above :

"Here amid the dense forest of age-old pines and the groves of linden and nut trees, stood a little house which at the beginning of the nineteenth century the godly Elder Ioanniky had struggled for twelve years...

After drawing up a plan for the proposed skete, Father Moses and Abbot Daniel [ of the main Monastery, who was fully cooperating where he could have been resentful or attempted to compete with the fledgling skete ] presented it to Vladyka Philaret. The Bishop of Kaluga approved it at once with the following resolution:

"June 17, 1821. May the Lord God bless the construction of a skete according to this sketch, and by His grace may He aid in its completion."

....initial expenses were met through the assistance of their benefactor, Dimitry Vasilyevich Briuzgin of Kozelsk, who donated 1,500 rubles in bank notes for the building of the skete. Other benefactors also came forth, among whom N Samgin was prominent. In August he donated 300 rubles, and later he made a plashchanitsa and other church articles at his own expense for the newly constructed church of the skete.

The main task was to clear the huge pine trees from the chosen site. The newly arrived anchorites and Father Schemamonk Vassian zealously set about this work. Day after day they labored with their own hands, helping the few hired workers fell the thick pines and dig out the heavy stumps with their deep and branching roots.

From the trees they had felled on the site, the skete-dwellers ... built a small cell for themselves in the southwest corner, and all five lived in it."

Apparently the spiritual pioneers arrived in Optina on June 6 of that year. I am not sure whether the Church calendar was then 12 days different than the Gregorian or 13 as it is now.
At any rate, if we can determine the correct date, we'll have a festivity here which might also catch on in other venues.

The date of the ukaz of Bishop Philaret [Amphiteatrov] was June 17 ; if 12 days are added, that gives the actual repose day of St Moses of Optina : June 29 --- 41 years later. For Elder Moses, these 4 decades were packed with exceedingly fruitful work in building up the Skete into a glorious bastion of spirituality for the entire Russian Empire.

PS. On that bicentennial occasion, pannikhidas should be served for the brave original donors, such as Dimitry Vasilyevich Briuzgin. 1,500 paper rubles had to have been a large sum to risk. And of course, for later donors as well, as well as for the writers of the time who publicized Optina and its golden chain of great Elders.

After all, it was through such a magazine article that the future Elder Barsanuphius, a devoted churchgoer, ever heard of Optina Skete and the marvelous Elder Amvrosy. So if the intelligent, educated seeker of truth Paul Ivanovich Plikhankov didn't know of the existence of this hidden jewel, what about the rest of the population ?
Top

Jumping ahead, here is another instructive example which can be of help to all those receiving monetary and other gifts in a church or monastic setting :

"Father Archimandrite Moses always received every benefaction, every offering, given out of love for the monastery, no matter how small, with sincere gratitude, especially in times of need. On the other hand, he was never overwhelmed by even the most sizeable contribution.

Once a family who had conferred many benefactions upon Optina Hermitage visited the monastery and stayed at a monastery guest house. They were displeased by some arrangement of the guest-master and went to the Father Archimandrite to complain.

"Look, Batiushka, we always eagerly welcome your fund collectors, we try to help them in any way we can, we assist the monastery with love as much as we are able - and your guestmaster refused to do such and such for us!"

"We had thought you confer benefactions upon us for God's sake," said the divinely wise Elder, "and that you await rewards from the Lord for your good deeds. But if you expect a reward from us sinners, better not confer benefactions on us, because we the humble and heedless ones can not reward you in any way."

The visitors not only were satisfied with this explanation, but also were comforted by the Elder's frankness and later themselves recalled with pleasure and gratitude how they received such lofty spiritual edification for their souls -- instead of the apologies and catering to their self-esteem which they had expected.

[Note !]>>> Of course, in this case Father Archimandrite Moses knew the people he was dealing with, and he did call the monastery guestmaster afterwards and admonish him appropriately."
Top

The above anecdote goes against the general description of Archimandrite Moses as "always friendly and solicitous". But perhaps in this case, the Optina Elder wished to give a good lesson to these monastery benefactors.
Top

The scene that Fathers Moses and Anthony encountered at Optina could not have been less promising, as is briefly summed up here in what is clearly tactful understatement :

"At the time when he assumed charge of Optina Hermitage, the brotherhood numbered 40.

Not all were capable people, and not all were progressing spiritually.

There was not even a proper hierodeacon for services on the feasts, as Father Moses himself told us, and it was necessary to invite a deacon who was not a monk from a nearby village or town.

The monastery was 12,000 rubles in debt; there were no reserves to provide the brethren with food, clothing and shoes; and finally -- and most important of all -- the general attitude of the brotherhood was hardly exemplary.

It was under these distressing and difficult circumstances, and completely against his will, and only out of obedience to the Bishop, and after lengthy persuasion with the frightening words, If you will not consent to be ordained, I will call you to account for it at the Dread Judgment of the Lord," that Father Moses received the priestly rank and the direction of the monastery."
Top
Post Reply
6 posts • Page 1 of 1