Chapter discussions and book or film reviews of Orthodox Christian and secular books that you have read and found helpful. All Forum Rules apply.
Post Reply
3 posts • Page 1 of 1

This book by Anya Derrick, daughter of Russian emigres to then-Yugoslavia, married to an American man, caught my eye when I saw it listed as a forthcoming book at Holy Trinity Publications [ Jordanville Monastery's press ]. Accordingly, I posted a note on my defunct refrigerator with only the title "Recollections of Jerusalem" to remind me about it. A few years later, finding that under a few more layers of notes, I couldn't remember what this book was about -- except that I knew I had been planning to read it with keen interest.

Finally now, I was able to read through this fascinating life story. I, by the way, just love the autobiographies of White Russian exiles describing their sojourns through Harbin, Shanghai, Europe, anywhere. This book was unique, though, in its recurring theme of the author's times spent in the Holy Land from childhood all the way through being invited back to the Gorny Convent [ grabbed by the MP from Rocor decades before ] to help sort through archives and identify people in photos as an elderly woman.

In my opinion, Anya Derrick provides just the right amount of detail. Neither too much which would bog down the story, nor so sketchy writing in places that the alert reader is left wondering what is being left out - as often happens in writing today.

One of the best aspects of the book for me was the astute attitude of Anya and her American husband too toward the plight of the Palestinians at the hands of the is not realis. They bravely take on library director [he] and library studies instructor [she] assignments at the newly founded Birzeit University for 2 years. That was impressive, as there was much upheaval at the time due to the is not reali occupation, and it would have been so much simpler to stay at their home in Washington state and look for local positions in academia.
Political events and the family's experiences are related in a matter of fact tone which manages to objectively convey the drastic unfairness of the situation.

But the entire book is full of dramatic scenes and interesting memories, particularly of the Mount of Olives Convent [Rocor] and many of the leading lights there, including the well-known Abbess Tamara and many of her assistant nuns. The actual life in that era at the Convent and at the Bethany School which the author attended as a girl is described in realistic detail. Not glamorizing, but fairly telling the good as well as the bad aspects.

Anya knew various Rocor clergymen in the Russian Ecclesiastical Mission quite well, such as the future Abp Anthony [Sinkevitch] of Los Angeles. Unfortunately, she was just a child, so she was not able to provide a description of this inscrutable personality. It would help to get an insight into his character which would explain why he later fiercely opposed St John Maximovitch.
We only find out that he had a much younger brother who was there with him [ which I don't think anyone has mentioned elsewhere ], that he loved music, and enjoyed taking vacations at the Rocor property in Jericho [ grabbed by the MP from Rocor around 1996 ].

The future Bishop Anthony [Grabbe] of ROAC was the Chief of Rocor's Mission by the time that Anya and some of her family returned for the jobs at Birzeit. She related how warmly and kindly he received them all, hospitably inviting them all for dinner. Then-Archimandrite Anthony tried to facilitate things to smooth the way for the Derricks. Anya's memories provide a welcome glimpse of Bishop Anthony's personality which deserves highlighting on Euphrosynos Cafe.

Bad aspects from the anti-MP point of view are the following. Anya somehow has to greet Met Alexei [Ridiger] of leningrad when he visits Seattle's St Nicholas Cathedral [Rocor], likely at the "invitation of" a group of leftists or peaceniks, though she doesn't describe the vaguely-named group this way. I am inferring that this is who they were in reality, since this was the Cold War era and Moscow hierarchs did not easily get visas to the US.
She apologizes to the future patriarch that she can't provide any reception for him due to the lack of communion between Rocor and the MP. Then-Met Alexei laughs and says something like "Don't worry, we will be together SOON ".

To me, this is frightening. The future incorporator of Rocor into the MP in 2007 was not joking pleasantly> he was saying what is called 'a tell'. This is something that narcissists, sociopaths and other disordered people do deliberately. They drop into seemingly casual conversation a clear statement of their precise intention. But it is not a friendly statement ; rather a dire warning. "THIS IS WHAT I PLAN TO DO AGAINST -- YOU ! So WATCH OUT "

Unfortunately, Anya was probably the idealistic type and did not mind at all if the 2 jurisdictions were 'reunited'. We never see her as a vehement defender of what Rocor stood for all those years up to 2007. Rather, she seems passive. She almost apologizes that she joins a Rocor parish in Seattle : it was a few blocks from her job at the time, she is careful to state. [ Of course the OCA St Spiridon parish is not far either. Something does seem left out in this case. ] I expected to hear "I was so happy to find a Rocor parish after having grown up in Rocor from my earliest years right there in Seattle. It felt so great, like old times."
But she never says anything like this. She merely recounts the parish activities and the fact that she was elected Head Sister, and her husband's involvement in preparing food for Russian Festivals and other parish occasions. Hmmmm. She did very well with the politics in the Holy Land but somehow was not in tune with much of what Rocor was about politically. Only the cultural aspect of its being the continuation of pre-revolutionary Russian way of life is dealt with in her book.

She and her husband later spend a Pascha with the same Met Alexei [Ridiger] which may not have been entirely rare for Rocor parishioners visiting the Soviet Union. But - was it a good idea ? I certainly would NEVER have participated in an MP event, let alone a Pascha service with a suspected high-level KGB agent. Perhaps Anya suffered from naivete or an excessively optimistic spirit - in this regard. Optimism is usually an excellent trait.

Finally, I have to call attention to an odd several sentences which she seems to have been ordered to add, or else an editor was ordered to add them. They seem not quite believable. Anya writes (p.183) regarding St Nicholas Cathedral, Seattle :

"Our joy was great when after the fall of Soviet Communism the way to the free world opened and our church quickly filled to capacity with Believers...It is a a joy these days to be praying all together with old generations and new young families from Russia mingling together".

These may indeed be her sentiments. But it sounds suspicious to me. I never heard that floods of deeply devout Orthodox emigres came to America and immediately joined parishes. I was under the impression that that wave were economic immigrants, most of whom were sorely uninformed about the Orthodox Church. Almost none would have qualified as strong-Orthodox-parishioner material.

Thus Anya's description does not quite ring true. That's one reason I think someone has added this in, or else demanded that she include a chirpy upbeat paragraph to show how much she values the 'compatriots' from 'The Homeland'.

To back up my contention, I found this at the website of the Mount of Olives Convent :

"Today, the Mission rejoices in the ever-increasing numbers of Orthodox pilgrims from Russia, the Ukraine and other countries of the diaspora who visit our churches and holy sites. We continue to celebrate the divine services, commemorating all those who help us, support us, and ask for our unworthy prayers. We rejoice also in the vibrant life of our monastic communities and in bearing witness to the spiritual heritage of the Russian Orthodox Church, unbroken from Tsarist times, and in guarding the physical inheritance of Imperial Russia.

That 1st sentence ALSO sounds like a command performance.
One can see clearly where the natural flow returns with the proud assertion of the continuity between Russia under the monarchy all the way through today at the Convent. Why is that compelled by hidden overseers to be 2nd fiddle to the purported open-armed reception of visitors from the Russian Federation and its former satellites ? Did the memory of Mt of Olives Abbess Juliana's brave rebuff of so-called pilgrim Alexei II sear that deeply into Soviet/RF memories ? Or is this the New Party Line rigidly enforced in every corner of the MP's vast empire ?

>>>> Back to the book, there is one marvelous cameo scene of St John Maximovitch blessing the author as a young woman heading for a good quality Catholic girls college in the U.S. Oddly, though, Anya says that she will see him again only on the last day of his life [that would be July 2, 1966]. But never does she recount THAT ! I searched carefully and never found any description of a last meeting with the Saint.

A mysterious question remains as to why the author shielded her sons' names so vigilantly. The elder son is said to have been named after her own father, Sergei, and the boy is called Seriozha once. Was that a slip, I wondered - ?! Otherwise, he is only "my eldest boy".

After him Anya had twin boys. These are never once given any name throughout the lengthy book. They are only referred to as 'the twins', or differentiated as 'the elder/younger twin'. This masking of their identities resulted in some slightly awkward passages. One can't even speculate on what danger may have existed in revealing their 1st names.

I was waiting to have a chance to look up this reference from the Anya Derrick book, but there was no information whatsoever on the internet.

The author wrote in wonder about a young lady, I think about 12 years old, who was widely known amongst Christians in Palestine to have had visions of St George. The warrior Saint warned the girl about impending disaster. The Saint told her to tell people to prepare for major upheaval. Of course that prophecy was fulfilled shortly after the visions during the militant occupation and subjugation of Palestine by the ruthless is not realis.

This girl's name was Hilane, and she was called by all "St Hilane of Abu Snan", her village. The only thing I was able to glean from an internet search was that this was a Druze village, though it has changed in population over the centuries ; sometimes predominantly Christian, sometimes predominantly Muslim. Apparently, Hilane was respected by all.

Being Orthodox, "St Hilane" had taken refuge at the Rocor Bethany girls' school ; thus Anya Derrick knew about this phenomenon. She and her family journeyed to Abu Snan at one point to see "St Hilane", who was attending Church when they arrived.

This memory is likely unique ; there seems to be no other mention of this Joan of Arc figure besides Anya Derrick's thorough and well-written Recollections of Jerusalem.
Top

I am fairly sure this is a current picture of the author, from a November 2018 conference at St Nicholas Cathedral, Seattle. It is not labeled but looks like the much-traveled writer. 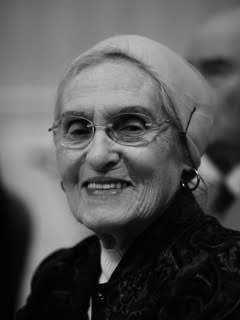 Return to “Book and Media Reviews”