I had never heard of this festival, but it is the 30th anniversary [minus some years out due to the horrific Cultural
Revolution in China] of the Harbin Ice and Snow Festival.
The sculptures are remarkable ! But amongst the Buddhas and glitz, some souls
cared to replicate the Russian emigre Cathedral of Harbin, St Sophia [I think I recognize that ! ].

Temp's are as low there in Harbin many winters as 30 below zero, Fahrenheit.
Imagine what one of our great "founding fathers", namely Metropolitan Philaret [then-Archimandrite] had to suffer while
ministering to the emigre flock in Manchuria!
I believe he was granted asylum by Australia just the year before this Ice Festival began life so he would never have glimspsed
these spectacular creations.
Top

Beautiful exhibit. Thanks.
Lord Jesus Christ, have mercy on me a sinner.
Top

Here is this year's. Amazingly, the Cathedral sculpture is put at the very end of the 22 images !
Such a statement.
There is also a different date given this year in the slideshow notes. While the title says "31st Harbin International Ice and Snow Festival", the notes claim that the Festival is only 10 years old.... very disorganized presentation.

Anyway, if you want to see this year's Cathedral sculpture, go to number 22 here :

It's almost time for the Harbin Ice Festival again. The dazzling ice sculptures will rise again in December. The official opening is always January 5. The 2017 Festival lasts until February 25.

According to a Chinese travel site, this is the biggest ice sculpture festival in the world [ 600,000 square meters large and visited by 10 to 15 million people annually ].

The edifices, which reach up to 150 feet high, are made by blocks of ice cut and hauled by a force of 10,000 laborers.

" What sets the Harbin festival apart is the scale and size of the sculptures and the beautiful lighting. It is bigger than the ones in Sapporo, Norway, and Quebec.

"At first, mainly Chinese participated, but in the last decade, it has become an international festival and competition. As the festival grows in international participation, and as China's economy grows, the size of the snow sculptures and ice architecture exhibits keeps growing. The work going into making these exhibits is astounding, and their size and beauty is amazing.

"The lightning [sic] effects on the huge ice sculptures in the Ice and Snow World are technologically sophisticated. They use computer controlled LEDs and regular lighting to animate stunning displays of color and design. "

1) reigning over a complex sculpture city
2) up close Beautiful.
Lord Jesus Christ, have mercy on me a sinner.
Top

Here is a picture of the REAL St Sophia Cathedral 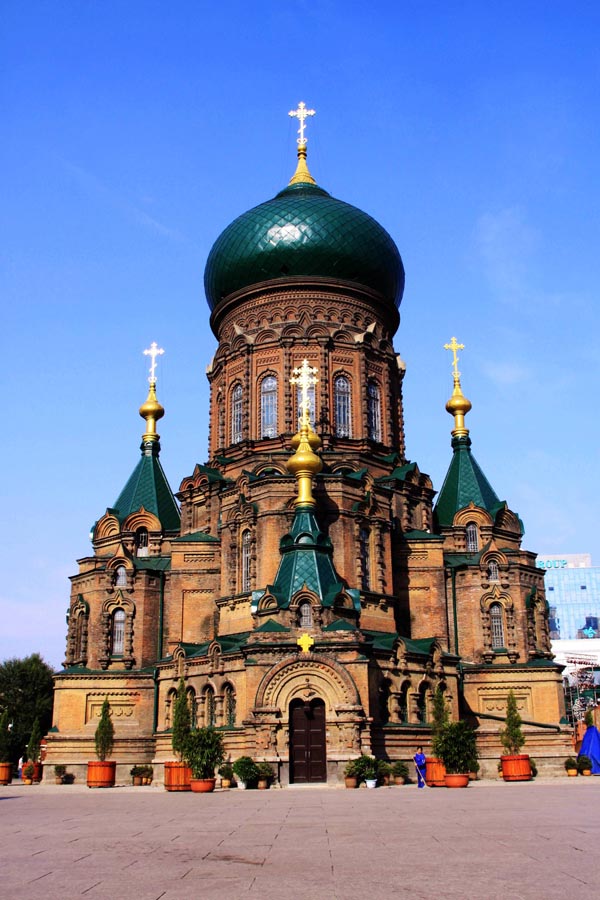 Whether for the Ice Festival or for summer tourism to see what remains of the formerly 27 or so Russian Churches there, Harbin offers high quality accommodation options. Surprisingly, there are properties from the Kempinski, Sofitel and Shangri-La hotel chains there. I discovered this information by chance looking at a forum on how to prepare for cold weather. On it, a Brazilian was asking how to layer clothes for a trip to -- the Harbin Ice Festival !
People from all over the world travel to Manchuria for this event, not minding the - 20 degree Fahrenheit temperatures.
Top
Post Reply
9 posts