From the 2017 Ice Festival. One gets a hint of old Russian monastery towers in those behind the large central dome, though they would not have sported tiny domes, let alone red ones ! : 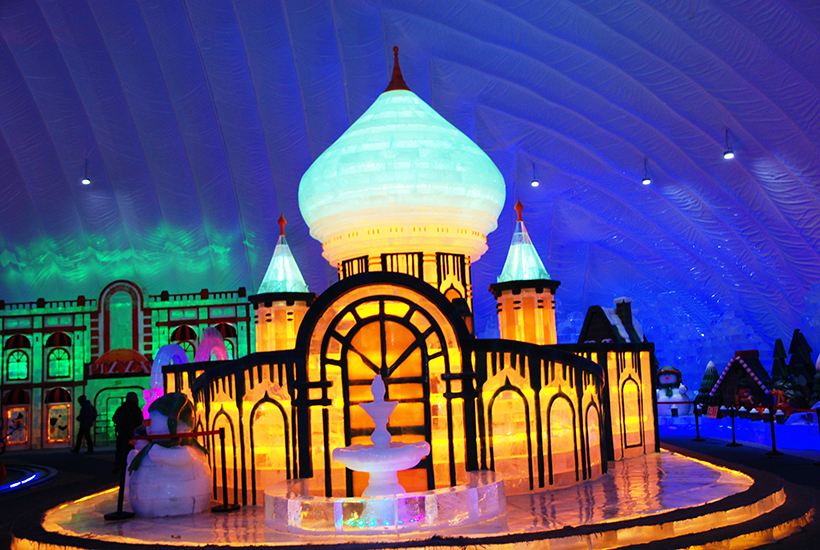 St Sophia again figures in the most breathtaking pictures. This is one of 2019's ice sculptures of the Cathedral. Photo taken at the opening ceremony today, Jan. 5, 2019.

The accuweather report below identified the admission price to the Harbin Ice Festival as quite high, a fact well concealed in the Chinese tourist literature ! :

Despite being one of China's coldest cities with average January temperatures of 9 F, millions of visitors flock to Harbin every year to visit the world-famous Harbin International Ice and Snow Sculpture Festival. Boasting 2,019 snowmen, the world's largest ice sculpture, incredible light shows and 750,000 square meters of venue space, 10 to 15 million people travel to the city every January to see the sculptures...

Among the festival events is the annual swim in the Songhua River. Some swimmers train for months to prepare their bodies for the cold water, as the popular event draws hundreds of participants. With temperatures occasionally reaching 31 F degrees below zero, workers have to break newly formed ice before each event...

The festival was first held in Harbin in 1963 and became immensely popular in 2001 when the event combined with the International Ski Festival. It has become a local source of pride in recent years, as cultural celebrations with traditional songs and dances are performed for visitors. The hefty price of entry also boosts the local Harbin economy and is a significant source of the city's annual income."

If one clicks on this link, a short panorama view can be seen above the article which brings the festival alive. Prominent in the video is St Sophia Cathedral. However, after the clip ends, it moves on to other subjects with surprising speed, so be ready to click it off.
Top
Post Reply
9 posts