DIscussion and News concerning Orthodox Churches in communion with those who have fallen into the heresies of Ecumenism, Renovationism, Sergianism, and Modernism, or those Traditional Orthodox Churches who are now involved with Name-Worshiping, or vagante jurisdictions. All Forum Rules apply. No polemics. No heated discussions. No name-calling.
Post Reply
1 post • Page 1 of 1

I was reading up on the fairly new St John's Skete, a podvorie I guess of Svyatogorsk Lavra in Eastern Ukraine. Somehow I missed most of the information about the establishment of it. But now that it's nearly the 25th Anniversary of the Glorification of St John, it may be time to mention this lesser known phenomenon.

Monks from this Lavra set out to locate St John Maximovitch's ancestral home in the village of Adamovka. One doesn't know how they settled on the exact location, since the family home was apparently demolished. But HOW, we wonder ? By the Soviets out of underlying hatred for the great Russian Miracle-Worker ? One is not told, at least not anywhere accessible in English. On the ruins of this home of Boris and Glafira Maximovitch and their children, rose the pretty Church of St John Maximovitch, to whom the upper Church is dedicated. 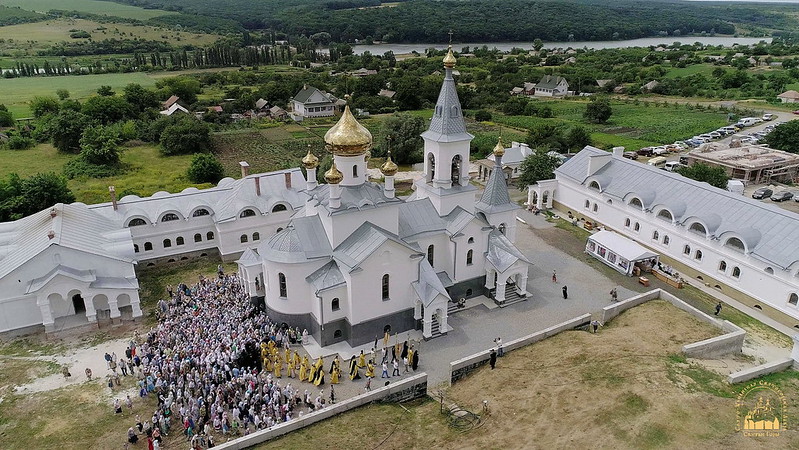 The lower Church is dedicated to St John's original baptismal Saint, Archangel Michael. The particular Feast of St Michael honored in this level is the Miracle at Chonae, Sept. 19. However, the November 21 Feast is also celebrated.

A whole Skete surrounds this Church, likely with expanding facilities for pilgrims.

However, one thing irritates me. Why is it that the armchair in which St John reposed at St Nicholas Cathedral in Seattle was sent to this new Church. Though it is not unreasonable, still, one feels that the armchair SHOULD have been kept in the cell of St John at St Tikhon's Church, formerly orphanage, in the Richmond District of San Francisco where many MORE pilgrims would be able to venerate it. San Francisco, despite its glaring defects in this time, is still an international city. Where the Donetsk region of Ukraine is reputed to be an area of strife, hardly conducive to a large flow of pilgrims from all over.

How did this decision originate ? The Kalfov family of Seattle, who knew St John from Shanghai, were able to buy it back from a garage sale put on by none other than their own Church, St Nicholas Cathedral, and treasured it for many years. Finally when the son, Sergei, had to move from his house, he reluctantly looked for an appropriate place to send the armchair. This new Skete was suggested to Sergei Kalfov. He shipped it by UPS to Adamovka, as he related in his speech "The Repose of A Saint", given several years ago and released onto youtube relatively recently. The traveling armchair arrived a decade ago, on October 11, 2009.

As a side comment, apparently pilgrims were thought to be kissing the armchair but mostly were instead venerating an Icon of St John which rests in the armchair. This shows great respect for the regional "hometown boy made good- A Saint". But one figures that while St John spent his formative years there, it was only his childhood. Whereas by the time he reposed, he was a phenomenal Miracle Worker. In my opinion, his last domicile, St Tikhons Home, should have been the recipient of this magnificent artifact.

As all visitors there know, there is an armchair in St John's cell, but it is not THE armchair. That is a disappointment to pious pilgrims who braved so many difficulties in today's San Francisco to arrive at St Tikhons.

Instead, St John's residence while he served as the Ruling Bishop of San Francisco received from another quarter a statue of the Saint, which was blessed last September 7. Since then, floral decoration and a lantern in his hand, lighting the way for generations after him, have embellished the figure of the Saint. 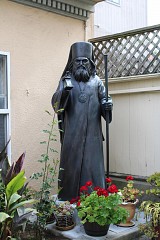